Yesterday we gave some early clues as to where hidden signed copies of The Longest Ride can be found today. Here are some more detailed clues to help you find these locations!

Technically a man-made island, this city has been called the “Golf Capital of the World”. It is situated on the center of a large and continuous stretch of beach known as the Grand Strand, and is a coastal city on the east coast of the United States. This city hosts 4.6 million visitors annually.
Store Clue: This branch of a big-box retailer originally founded in Arkansas is located on a road with a Wendy’s, a Yankee Candle, this store backs up on a body of water.

The Ocean Drive section of this town is home of the Shag (a slowed down version of the Jitterbug). Vanna White is a notable native.
Store Clue: Happy Nails, Five Guys Burgers, Staples and The Grill House are all close to this store’s location, a branch of a big-box retailer founded in 1962.

Second-largest city in this U.S. Commonwealth, it is known as both “the Steel City” for its more than 300 related businesses and “the City of Bridges” for its world record 446 bridges.  H. J. Heinz invented his famous recipe for ketchup in this city, introducing it to the world in 1876. There are 3 store locations in this city’s suburbs included in this Scavenger Hunt!

Bret Michaels, lead singer of Poison, was born here. The Maridon Museum, located in this downtown, focuses on Chinese and Japanese culture.
Store Clue: This branch of a big-box retailer founded by Sam Walton, is located on a street that shares the same name of the town. There is a hospital across the road.

In 1967, this town was the birthplace of McDonald’s Big Mac sandwich. General George Marshall (famous for the Marshall Plan to rebuild Europe after WW2) was born here.
Store Clue: On the way to this branch of a big-box retailer that used to use the slogan, “Always Low Prices, Always”, you’ll pass an Arby’s and an IHOP, on a road that shares its name with the store.

This town is the site of the LeMoyne House, a national historic landmark of the Underground Railroad, and also Home of the Pony League World Series.
Store Clue: This store is surrounded by food! You’ll pass a Ponderosa Steakhouse, a Krispy Kreme Doughnuts and a Cracker Barrel Old Country Store on your way to this branch of a big-box retailer originally founded in Arkansas.

This is a port city in and is the county seat of New Hanover County in coastal southeastern United States, originally settled by European Americans along the Cape Fear River. Home of the USS North Carolina war memorial. The TV show Dawson’s Creek was filmed here.

Store Clue: At this branch of a big-box retailer founded in 1962, there is a Lowe’s Home improvement store behind this location, and it’s across the street from an Advance Auto Parts store. Wendy’s, Arby’s and Chik-fil-A are all close by.

Store Clue: Kirkland’s and Cracker Barrel Old Country Store are both neighbors of this location of a big-box retailer originally founded in Arkansas. Wingate by Wyndham is just down the road.

This is a city in and the county seat of Hamblen County, in the eastern part of The United States. They won the Little League Softball World Series in 2007, and two horror films—The Evil Dead and Five Across the Eye – were filmed here. Unique overhead sidewalks downtown were completed in 1969. This is the home of the Davy Crockett Tavern Museum.
Store Clue: This store, a branch of a big-box retailer founded in the town of Rogers, is located across the highway from a state Community College. College Square Mall is just down the street.

9th largest city in its state, this city’s names is the singular form of the original French name, meaning “Clear Waters”, for its river of the same name. This is the Horseradish Capital of the World, and hosts the US National Kobb Championship.
Store Clue: At this branch of a big-box retailer originally founded in Arkansas, Baymont Inn and Suites, Office Max, Sterling Optical and David’s Bridal are all across the road.

This city in Trumbull County is located on the eastern shore of Mosquito Creek Reservoir. The area was once known as Baconsburg, after Samuel Bacon, who built a sawmill and several buildings in the area during the early 19th century. Its school district is known as Lakeview. It has one elementary school, one middle school, and one high school.
Store Clue: On the way to this branch of a big-box retailer based out of Bentonville, AR, you will pass a McDonalds as you turn onto the road to this store with a car wash, Cadillac and Harley Davidson dealerships very close by.

Founded in 1837, it was named after the British university city, and has been named by USA Today as one of the top six college towns in the nation. The courthouse square, called “The Square”, is the geographic and cultural center of the city. William Faulkner resided in this city until his death in 1962.
Store Clue: The store is orange and on the square.

This is the only U.S. state capital (among the 47 located in counties) that is not also a county seat.  The city’s transition to manufacturing began in 1897 with the founding of the Olds Motor Vehicle Company by R.E. Olds. Former Major League Baseball  pitcher and sports-broadcaster John Smoltz went to high school here before he was drafted in the 1985 amateur draft.
Store Clue: Located in the Eastwood Towne Center.

The city was founded in 1847. The First Transcontinental Railroad was completed here in 1869. They hosted the 2002 Winter Olympics.
Store Clue: Located on the corner of 15th and 15th.

This is a hilly seaside community, occupying 7 miles of curving coastline along the Pacific Ocean, and is surrounded on three sides by ocean bluffs and beaches. The Scripps Institution of Oceanography, one of the nation’s oldest oceanographic institutes, was founded here in 1903.
Store Clue: Red store sign, across from a bank.

This is a suburban city in Middlesex County. Rather than having a single city center, this is a patchwork of thirteen “villages”.  It was settled in 1630 as part of “the newe towne”, which became Cambridge in 1638. The Fig Newton cookie is named after the city.
Store Clue: On Needham Street near a gas station that shares the same name. 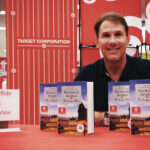