Ambrose will star as “Belle”, a Civil War-era mother of three who becomes an outlaw in an attempt to defend her family’s land from a corrupt bank. Stay tuned for more casting and production news in the weeks ahead! 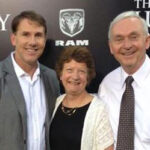